One of my favorite food is mushroom especially enoki mushroom and eryngi mushroom(king oyster mushroom). Whenever I visit Asian supermarkets, I always buy either of these mushroom.

I think that was when I was in college. I often used to see this mushroom commercial on TV.
This commercial is done by Hokuto corporation to promote mushrooms.

After you hear the song for a few times, you remember it and the music won't stop playing in your head. Oh, It started again!

Mushroom characters in commercials are cute too. Whoever thought this song and the characters is very smart. This commercial got me interested in trying new kinds of mushrooms and I started eating a lot more mushrooms.

Yesterday, I used enoki mushroom and wrapped them with thinly sliced pork.
My mother used to make this dish with bacon, which also tastes great. 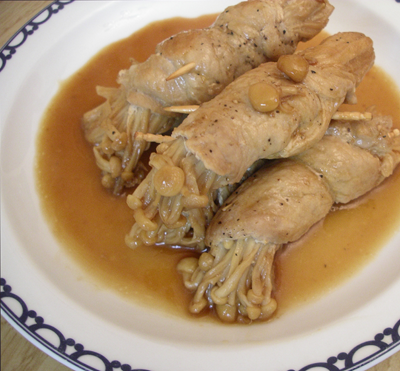